Fifteen U3A members visited Woodhorn Museum near Ashington in Northumberland on the 17th May. The main purpose of our visit was to view the permanent exhibition by a remarkable group of men-The Pitman Painters. The group, largely made up of coal miners, first came together in 1934 through the Workers Education Association. They wished to study art appreciation so their tutor, Robert Lyon, encouraged them to do it themselves in order to understand what it was all about. Our group enjoyed the art which captures every aspect of life in their mining community. Having Jack Temple, an ex-miner, with the group added to the enjoyment of the day as he was able to provide insights into much of what was on display in the museum. A photographic exhibition of Northumberland scenes was also popular. From Freda’s photograph however, it seems the posterior positioning of one of the exhibits received the most critical acclaim. 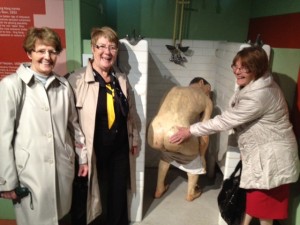 “Mary has given me permission to add a few words to her report above.   I wanted to comment on the very impressive mock-up of Ashington coal mine.  It was excellent and gave the impression of actually being there and feeling the claustrophobia, hearing the miners’ chatter and other sound effects.  It was here that Jack came into his own helping us to understand the various situations.  When we passed some coal tubs leading from a huge similar picture on the wall, which was quite an effective display, it reminded me of my Dad telling me that an empty tub was called a “chum’un”, which Jack verified.   I remembered my Dad telling me of a colleague who told him that a poor miner had died from “a chum’un on the brain”.  I was never sure whether an empty tub had fallen on him from a great height, or whether he meant a tumour.  Bless him.

I was also fascinated by a proggy and hooky mat demonstration and fancied a go.  I’m thinking of setting up a group!” (Freda)