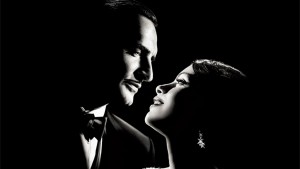 There were mixed opinions on this film.  Ratings ranged from  4 to 9, average 7/10 overall.

The Group’s comments were:  film quite flat, with little emotion and not worthy  of all the Oscars; the storyline was weak but probably fitting for a silent movie; clever camera angles and shots; music atmospheric; tapdancing great.

Everyone agreed that the dog stole the film!    Uggie showed that he had more sense than most of the cast, especially when he ran for help when George set his apartment on fire and anxiously pestered his owner as he was contemplating suicide.   The dog was a complete star and without him the film would have been very much the poorer.

The storyline was fairly predictable (with shades of A Star is Born and Singing in the Rain amongst others).  It’s hard to believe that many people at the time thought that talkies wouldn’t last – George amongst them in this case.   The obvious attraction between the two leads never did quite fully develop but a happy ending was certainly implied.   As noted by one of our Group, the somewhat simplistic storyline was conducive to a silent movie script, or vice versa, as a more complicated story wouldn’t have worked in silent mode.

The occasional use of sound is surprising, for example, during the scenes where George realises that SOUND is coming into his world, yet his voice is silent, and after the final tap dancing sequence, when he says “With pleasure” the only words we hear him utter; on the other hand the written word “Bang” was a bit of a shock until we realised it referred to the car crashing into a tree rather than a gunshot.

Jean Dujardin who played the part of George Valentin gave an excellent and riveting performance, his expressive face and eyes were a joy to behold, especially his beautiful and captivating SMILE – very much appreciated by a group of “us laydees”.

Berenice Bejo as Peppy was beautifully expressive too.

Despite the variable ratings, we were all happy to have seen the film!

VERDICT: Charming – do you agree?