Salmon Fishing in the Yemen

Salmon Fishing in the Yemen 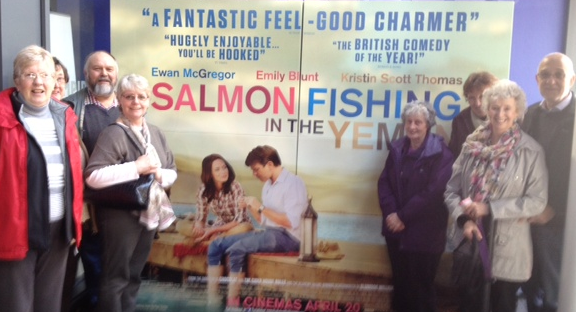 The Group loved the film and found it both uplifting and thought provoking.   The Sheikh who wants to bring salmon fishing to the Yemen talked of “having faith” and that was a touching theme throughout the film.  The Sheikh is the catalyst in the film: a knowing and spiritual man, with plenty of money.

George F hit the nail on the head when he pointed out that “faith can move mountains, but money can do it better”.

Ewan McGregor as Fred Jones, played his part to perfection; he is very believable as a somewhat boring and inflexible sort, bordering on having Asperger’s Syndrome, yet very endearing.  The Yemen Salmon project is forced upon him by the PM’s spin doctor.   From dismissing the project out of hand, he begins to learn to have faith in the project, in himself and in his future, and eventually makes decisions appropriate to his changing outlook.  He even has faith in the farmed salmon reverting to type and swimming upriver to spawn. Fred’s humour and bearing is low key throughout.   In comparison, Civil Servants’ machinations are stereotypically silly and crass!

Some of the references to angling and anglers appealed, e.g. the Civil Servants unsuccessful efforts to acquire wild salmon … George F particularly liked and related to a Civil Servant’s comment about fishermen tending to go berserk if a canoeist in a fluorescent jacket passes by! … the PM’s spin doctor relishes the thought of appealing to 2 million anglers/voters … etc.

The extremes of climate and topography between Yemen and Scotland were naturally a source of concern for the Salmon project, but there were plenty of opportunities to enjoy the magnificent contrasting scenery.

I approached this film with some trepidation, fearing it might follow the book of the same name closely, but thankfully, the film is much more palatable and the storyline simplified.  I think I was the only one to shed a few tears, but then I always get emotional when a film is touching and I feel empathy for characters and situations.  The book certainly did not make me feel that way!

Did you see this film? What did you think?