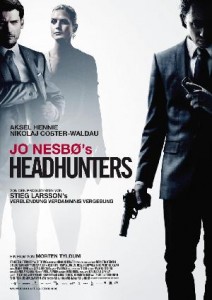 Headhunters has been billed as a possible cult classic.  We voted it 8/10

Our group generally felt that the storyline and basis for the conflict was improbable, with weak reasoning given for the extreme, though riveting, violent action with nice twists and turns, delivered with a spot of black humour, which takes up most of the film.

The Villain wants to infiltrate the Hero’s recruitment company as CEO to gain access to its technology.   That was the reason given unless I missed something.  But why he should want to do that when his own company has such amazing technology of its own, I don’t know.  They allegedly created GPS and discovered micro-tracking systems, which comes in handy.

The ultimate conflict between baddy and goody is wildly entertaining and gruesome, with plenty of gasps, cringes and the odd titter from us.  It was nail-biting, with “jump in your seat” moments.

The Hero, not a likeable person to begin with, “finds himself” during his trials, and not to give too much away (although maybe I am?) is transformed into Mr Nice Guy, happy with a simpler life-style.

What did you think about Headhunters?