As we bypassed the Reception Desk at Beamish Hall we heard the laughter. Walking into the room there was a sea of reds and purples, with warm sunshine streaming through the windows.

There were enormous round tables in the room each seating eight people, set for tea with a nice linen napkin in each place setting. Cups of tea and coffee were served almost immediately and they never ran out.

The tea was served promptly at 3.15 with a variety of sandwiches, roast beef, ham, and tuna to name but a few, served by smartly dressed waiters and waitresses (who worked really hard). Then they served the cakes on enormous cake stands, I have never seen cake stands that large, I thought there would be one for each table but no there were three.

There was a good selection of cakes including cream horns, my only criticism is, they were a bit stingy with the filling, Jean Mullen’s are better!

We could not eat all of the cakes so lots of take home boxes were provided by the hotel for us.

We all had a great time and as usual there was a great deal of chatter and laughter.

We all enjoyed singing the Red Hatters Anthem with great gusto written by Gordon Ayre.

Does anyone have photographs they can send me please? 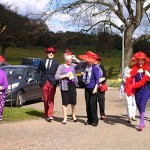 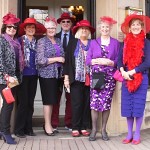 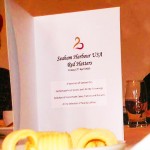 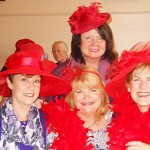 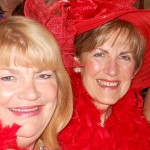